The Physical & Spiritual Concept of Soulmates in Hinduism

How many times have we heard people in books and movies and even real-life go on about that one true connection with their “Soulmates”? The possibility of finding someone who shares the same outlook on life and living seems surreal. While some might agree on what to eat for dinner but struggle to understand their political opinion whereas some might share the same interest in life yet fail to agree on the minutest detail pertaining to the most mundane daily tasks. 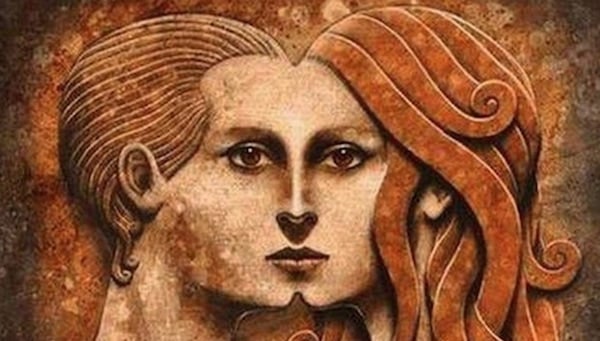 One thing is for sure, being soulmates doesn’t always mean the same to all the people. Sexual, spiritual and emotional balance is often the gold standard in determining soulmates, though each of the qualities might exist without the other or cohere altogether. Here is a brief Concept of Soulmates entertained by Hindu Dharma.

The Yogic Soulmate and Kundalini

The spiritual branch of the mystical religion believes in the concept of the other half or the twin flames, Like the theological concept of the two-headed

Of a Man’s seven centers, the lowest being the sex center and the highest the samadhi, the harmony of the seven centers with that of a woman, signifies that you have found your soulmate. Whenever it happens, absolute oneness is felt. There is unity and not just a union .Two people utterly melt into each other, unio mystica. They function as one, almost like the clichéd two bodies, but one soul theory. It is in absolute harmony and the highest form of love and connection at its peak.No meditation is needed –  this love is enough.

Kundalini is the ancient Sanskrit name for the primal life force that animates all living beings. The activation of this energy, also known as Holy Spirit, Chi or Prana, initiates the process of spiritual growth and enlightenment by unifying our body, mind, and soul. Since it originates from the Divine Source, it leads into an expanded state of consciousness and interconnects us with all living beings – and ultimately God. So the ultimate purpose of a soulmate is the getting us to the closest proximity of the divine connection within the realms of reality. Before we divulge more on this let’s get familiar with the concept of Twin Flames.

Within us, all lies specks of Almighty God – a composition of both the energies feminine and masculine. Tiny rays of God is also not a male or a female. Both the energies masculine and feminine rest in God, this is why Lord Shiva is also known as Ardhnarishwar Shiva.  Both the atoms are combined in these rays until not manifested on the physical plane. In its first manifestation on the physical plane, these tiny rays are manifested in the feminine and masculine flames. These feminine and masculine flames are called twin flames or twin souls. Everything in the world is manifested in duality (the male and the female). Therefore, each and every soul has its counter soul called as twin soul or twin flame. One-half of the soul manifests the masculine side and other manifests in the feminine side. The destiny of the twin souls is to reunite and get liberation at the end of the soul life cycle.

These twin flames remain tied together with a crystal chord throughout its entire soul life journey on the physical as well as on the astral planes. Due to the karmic reasons, these two flames are departed and then they further continue their life learning until the reunion and the liberation.

“Twin Flames are feminine and masculine counterpart energy of the same energy on the same frequency.”

A kundalini awakening is one of the effects of coming into contact with your Twin Flame. It is the very purpose of your Twin Flame to burst into your life in divine timing to spark you into remembrance of your true infinite & immortal nature. The force required to release the pulsating, creative kundalini energy is atomic – just like the nuclear fusion of the complementary polarities of the energetic bodies of the Twin Flames.

The awakening of the Kundalini is a gradual process and the process leading up to the energy reaching the crown chakra producing self-realization and enlightenment can take years. This process can take longer if the Twin Flames have not physically consumed their union since it is their sexual union through the sacred marriage/alchemical union (also known as hieros gamos) which helps bring on the union on all levels. 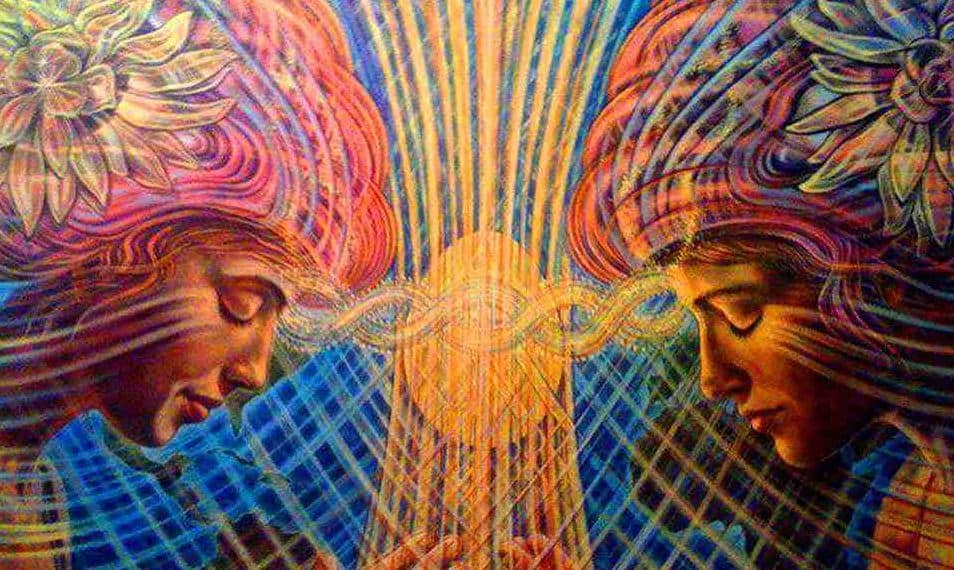 The reason a full-blown kundalini awakening rarely happens immediately upon meeting the Twin Flame is that it is often only through the separation that their passion for each other becomes internally validated and their egos heal sufficiently to allow the merging can take place. This is where, even when the Twin Flames are no longer in physical contact, the energy connecting their central nervous system and five major organs will be linked up. The awakening now emerges from the unconscious interaction with the energy body of our Twin, often cumulating after we have reached a moment of surrender. The resulting atomic fusion then releases the secrets that are locked within our DNA and changes the frequency vibration of the mental body, sparking unity within ourselves as well as with the Divine.

Once this happens, specific spiritual abilities manifest, such as sensing each other’s thoughts telepathically and each other’s energy naturally, even when not physically together, the incredible sensation of unconditional love, bliss, and desire for our Twin Flame. This does not mean that both Twins are ready for the union at this point, it just means that the spark has been ignited and everything from this point on is preparation for their final union together. As the Twins adjust and balance their energies on all levels these entwine and form one single being– with the physical level often being the final icing on the cake. Therefore, in reality, the kundalini awakening is the awakening of the oneness they once shared.

The legendary examples of Twin Flames in Hinduism 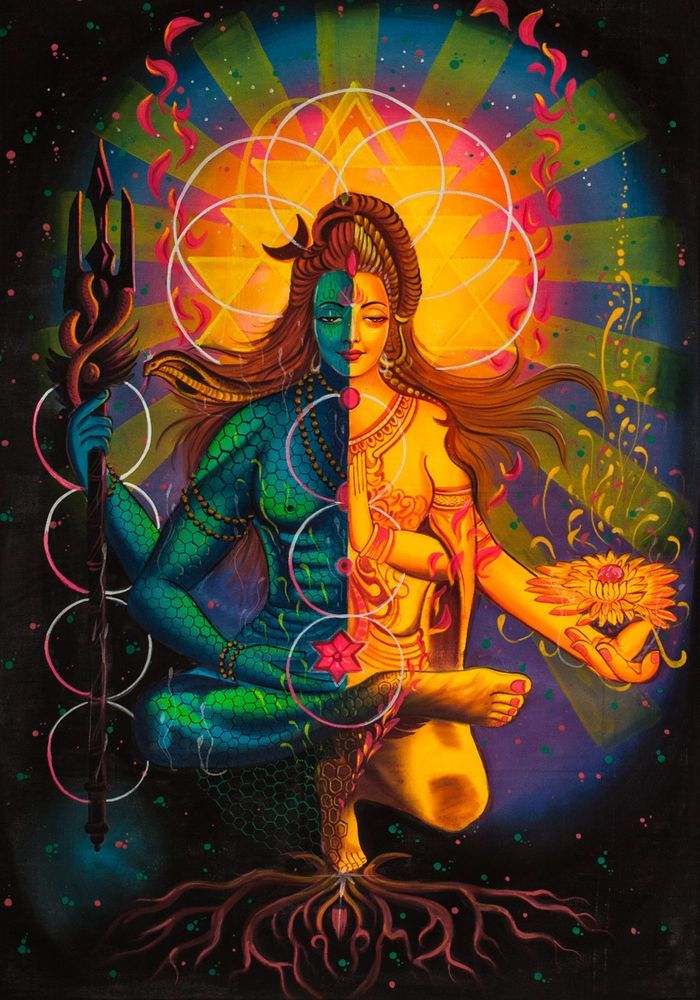 SHAKTI symbolizes the feminine principle, the activating power, and energy.

Whenever a power becomes active, and wherever energy exists, Shakti is working. Other terms for these primal principles are PURUSHA and PRAKRITI; Purusha is consciousness and Prakriti is nature. Shiva and Shakti are manifestations of the all-in-one divine consciousness – different sides of the same coin. In many pictures, these two primal powers are each depicted as being one-half of the same image; one side female and one side male. The left side is the Divine Mother, Pārvatī, the “feminine” energy, and the right side represents Shiva, the “masculine” consciousness.

Shiva resides in the Sahasrāra Chakra and Shakti in the Mūlādhāra Chakra. When Prakriti and Purusha unite in the Sahasrāra Chakra, knowledge, knower and the object of knowledge become one. Once we have experienced this no desires remain within us because we realize unequivocally that everything we have ever yearned for is carried within us. In this state of absolute consciousness, there are no polarities and therefore no more sorrows; there is only everlasting joy, unconditional love, unlimited compassion and total understanding for all living beings.

The divine play (Lila) between Krishna and Radha is very playful. Like a great game of cat and mouse, the anticipation is what makes the game exciting, not the conclusion.

It is this sweet separation of lover and beloved that is cultivated in the tradition known as bhakti-yoga. (Learn more about Yoga)

Krishna’s and Radha’s relationship has its challenges — despite their love, they eventually both marry other people. In Krishna’s case, thousands of others. What they represent, then, is not some idealized romance. Rather, they represent the steadfastness of our desire to experience the divine. They embody the unquenchable devotion that persists even when what we most want remains elusive, just beyond our grasp.

Radha Krishna is collectively known within Hinduism as the combination of both the feminine as well as the masculine aspects of God. Krishna is often referred as Svayam Bhagavan in Gaudiya Vaishnavism theology and Radha is Krishna’s supreme beloved. With Krishna, Radha is acknowledged as the Supreme Goddess. It is said that she controls Krishna with Her love, and it is believed that Krishna enchants the world, but Radha “enchants even Him. Therefore She is the supreme goddess of all. Radha Krishna”.

(Sources: Mirror of my soul, Shiva and Shakti ,yoganonymous)

Positive and Negative Effects of Saturn in 12 Houses

The Untold Mystery of Lord Shiva and Shaivism in Vedic Texts

6 Most Important Vedic Gods According to Rig Veda

1200 Years Old Kailasa Temple Made Out of Single Rock

Are you sure want to cancel subscription?